The expansion of the cemetery 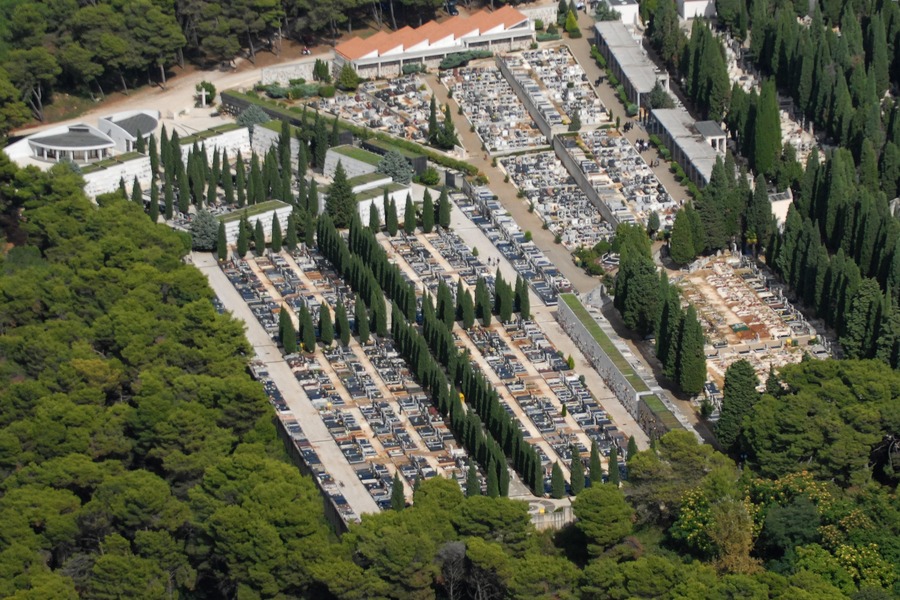 The first location to which the Cemetery expanded included a total area of 2856 m2 and was located near the Cemetery, building on the existing Cemetery. An enclosed space for Lapidarium got planned along the entire length of the wall on the northeast side.

Burial plots got positioned along the external walls. Niches for adults got placed alongside the retaining wall or the lot on the southeastern side, and they were planned in dimensions 0,80x0,70x2,70 meters, with three raws in height. There will be 430 spots available for burial on the first location, i.e., 83 burial plots for six burials, 34 burial plots for three burials, 209 cemetery plots, and 105 niches for adults.

The auxiliary facility was located at the stated location, positioned next to the cemetery wall, reconstructed, upgraded, and transformed into a refrigerated chamber.

The second location of the expansion included an area of 2706 m2. It was in the western quadrant of the existing Cemetery, with which it got joined. Pathways got planned for subsequent expansions. The dimensions of burial plots and cemetery plots are equal to their dimensions in the first location. Niches were positioned alongside the two main entrances into the expanded part of the Cemetery, and the back of the burial niches got planned as a wall Lapidarium. The green surface represents a roof covering these niches. Burial niches for bones and niches for urns became located in this part of the Cemetery. In the central area of the semi-circular expansion, there is an area for the scattering of ashes surrounded by a semi-circular wall, designed as a foundation for placing the nameplates containing names of a deceased person. This area covers 50,24 m2. On another location, there will be a total available area for 693 burials, 63 burial plots of which are for six burials, 48 burial plots for three burials, 165 cemetery plots, 95 niches for adults, 186 niches for bones (double), 84 niches for bones (single), and 52 niches for urns.

The Cemetery Monte Giro expansion project envisions paved pedestrian pathways and Rest stops with benches, space for containers, wastebaskets, and cemetery faucets. At a minimum, 10% of the total area planned for expansion will get horticulturally arranged, flowers planted, and other plant material will get added. The walls will enclose the stated expansions.

TGT-ADRIATIK LLC from Pula is a contractor working on the expansion and arrangement of the town cemetery. The total value of investments is HRK 8.921.094,91 with VAT included. Funds were provided by the company's financial plan Monte Giro LLC Pula and partly by the Town budget.

According to the Framework Agreement, all works on the reconstruction and expansion were due in 200 business days.